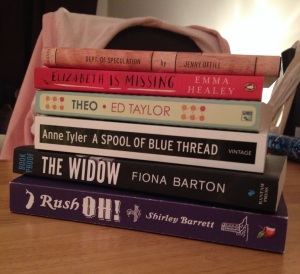 In October I read and reviewed six books, all fiction:

Rush Oh! by Shirley Barrett (Virago) – The first novel by screenwriter and director Shirley Barrett is a beautifully written story based on a whaling family in Eden, New South Wales. Narrated by Mary, the eldest daughter of the Davidson family, we uncover their family life and the challenges they face in the particularly difficult whaling season of 1908. It is both an insightful glimpse into traditional whaling and a charming, poignant look at family life and love.

The Widow by Fiona Barton (Bantam Press) – Destined to become a bestseller, Fiona Barton’s debut is a gripping psychological thriller that offers something a little different. The protagonist is Jean Taylor, whose late husband Glen is accused of a terrible crime. It examines how crime affects those behind the scenes, what it is like for the family of a suspect. Barton’s background in journalism brings added authenticity, an insight into the involvement of the press. The Widow is a gripping read and an exciting debut.

A Spool of Blue Thread by Anne Tyler (Vintage) – Featuring on the shortlists of both the Bailey’s Women’s Prize and the Man Booker Prize, Anne Tyler’s critically acclaimed novel is a domestic saga spanning the generations. It tells the story of Abby and Red Whitshank and their family, based around their Baltimore home which is a character in itself. From their story we spool back through generations and see Red’s parents’ first meeting right through to Abby and Red’s children and grandchildren. An enthralling novel which whilst simplistic in plot presents a gradual reveal of information to maintain the interest. The reader watches a family tree unfold and has a glimpse at family life, the everyday interactions and the secrets lurking beneath. This is an enjoyable tale of family, love and home.

Theo by Ed Taylor (Old Street Publishing) – In Theo the reader gets to see the world through the eyes of a ten-year old boy who has an unusual and often unpleasant childhood. Residing in a decrepit mansion with his grandfather and his minder, Theo has limited contact with his rock musician father and his estranged mother who is in and out of rehab. This is a heartbreaking coming of age tale where a boy witnesses the dark side of rock and roll – his house is full of strangers doing things beyond his comprehension. This is a story of childhood, growing up and the effects of fame and fortune on those most vulnerable.

Elizabeth is Missing by Emma Healey (Penguin) – A gripping mystery novel with an unlikely detective. Its protagonist is eighty-two year old Maud, who whilst battling dementia is determined to find her friend Elizabeth. Increasingly muddled and confused, Maud struggles to be heard as she tries to persuade people that Elizabeth is out there. In addition to Elizabeth’s absence there is also the matter of sister Sukey’s disappearance some seventy years previously creating a twin mystery to keep up the reader’s interest. This is a compelling detective story, with a poignant look at dementia and its impact on sufferers and family alike.

Dept. of Speculation by Jenny Offill (Granta) – Jenny Offill’s unusual second novel examines the ups and downs of a marriage. Told in an innovative fragmented style we meet a woman who is struggling with life as a mother and a wife, roles which she never intended on taking, instead wishing to focus on her art, to avoid the mundane things in life. Looking at relationships from the early stages, through to marriage and infidelity, this is a poignant look at life and love and feeling lost. 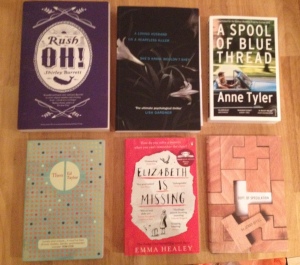 Full reviews of all my October reads can be found in my October 2015 archive.