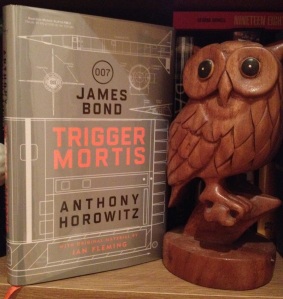 Over the years I have spent many hours in front of the TV watching James Bond on film but I had never read any of the original novels by Ian Fleming that inspired them. With this in mind I was looking forward to reading Trigger Mortis, a new novel and a new mission for Bond written by Anthony Horowitz.

‘He examined her now; the black hair carelessly cut, the full lips, the decisive cheekbones.’

Set in the 1950’s the events of Trigger Mortis follow on from those in Goldfinger. Although this is a sequel of sorts the story is stand alone so if you haven’t read/seen Goldfinger this doesn’t affect your following of the story. It sees the return of some iconic characters, most notably Pussy Galore. The early chapters show that Bond and Pussy Galore live together, which seems surprising for Bond considering his reputation for falling for multiple women! However, their domestic bliss is short-lived as Bond is soon called away on another mission.

‘There is no relationship in the world quite like the one between the man who intends to kill and the man who is about to die.’

SMERSH, an old adversary of Bond are back and there is a plan afoot to sabotage a Grand Prix race at the dangerous Nurburgring race track. Bond soon finds himself taking part in the race as the life of one of its drivers is under threat. I was interested to read that some of the words used within these chapters were Fleming’s original material. With this in mind I thought the story flowed seamlessly and I wouldn’t have been able to distinguish the two writers work. This is one example of how well Horowitz has reflected Fleming’s writing style, and stayed true to the original Bond.

“I think you are trying to make me angry, Mr Bond.”

A key component of any Bond story is the villain and in Jai Seong ‘Jason’ Sin Horowitz has created a masterful character. Following on from the race at Nurburgring, Bond observes a meeting between a driver and sinister millionaire Jason Sin. This uncovers a new plot which has potentially devastating consequences that could change the world. It soon becomes apparent that Sin is a dangerous man and I thought he was terrifying! However, despite his chilling persona – and horrifying pack of cards – there was a human side to this villain. Sin has his own story to tell, his own heartbreak.

“Who are you and how do you fit into all this?”

James Bond is famous for his encounters with members of the opposite sex and this novel is no different and he certainly has his eye on the attractive female characters. I dislike Bond’s attitude towards women and there were phrases in the novel that irritated me but I appreciate that this is representative of the character and of attitudes at the time. However, in Jeopardy Lane we have a Bond girl who seems to offer something different. Bond joins forces with Jeopardy when she also expresses an interest in the activities of Jason Sin. It soon transpires that there is more to Jeopardy than her looks and there are ways in which she is superior to Bond. Smart and resourceful, she surprises him, challenging his perceptions of her.

Trigger Mortis was an enjoyable read. I was immediately intrigued from the prologue and taking away Bond, the villains, the cars and the women this was ultimately a gripping thriller. There is certainly plenty of action and adventure as the famous spy finds himself in a series of dangerous scenarios. Horowitz has brought James Bond back to the page in a thriller which feels very modern whilst paying tribute to the classic Bond that is much-loved.

One thought on “Trigger Mortis by Anthony Horowitz”