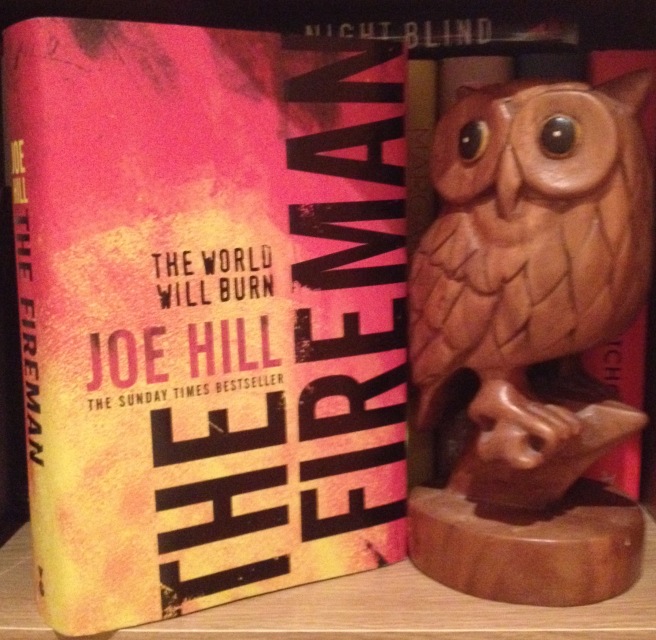 I was excited to read The Fireman, the latest novel by Joe Hill as I was intrigued by its premise.  In it is a world consumed by fire – an incurable disease known as Dragonscale which kills its host through spontaneous combustion. With fear and panic spreading through civilisation, more and more people become infected and the world becomes a scarier place, but there may be someone that could help…

“The Dragonscale is like anything that makes fire, Nurse Grayson. You can use it to burn a place down…or light your way to something better.”

The novel focuses on Harper Grayson, a calm and collected school nurse who works as a volunteer at the hospital where she is enlisted to help with the sick, as the city descends into further chaos at the hands of Dragonscale. The selfless Harper does all she can to help those around her, but soon it is herself that is in need of a helping hand. She notices the telltale marks on her skin that indicate she has been infected by this spore, and is forced to face the prospect of an untimely death at the hands of a terrifying disease for which there is no known cure. But there is one thing left in a burning world to spur Harper on to survival – she discovers she is pregnant. She realises there is a chance that her baby could be born free of infection and she becomes determined to live long enough to deliver her child safely into the world. I was immediately gripped by Harper’s plight and desperate for her to succeed, keen to hear more of her story. But the illness etched into her skin is only the start of her frightening journey, and there is a lot she must face if she is to make it through.

‘To live for others was to live fully, to live only for yourself, a cold kind of death’

Our heroine is forced to find a new hero when her husband Jakob becomes increasingly unhinged on discovering her fate. But Harper hears rumours of a man known as ‘The Fireman’ – a man who has been infected with Dragonscale but has the ability to control the flames, an ability which could prove crucial to Harper. This leads to her joining the inhabitants of Camp Wyndham, a dynamic group of people who are all trying to make the best of their situation, to survive in a world that is collapsing around them. Throughout the novel there are a lot of characters to meet, some that you love and root for and some that you hate. For Harper and her companions there is a tough journey ahead –  they are under threat not only from their affliction but from the vigilante groups who emerge intent on cleansing the world of all infection. This leads to a lot of violence and conflict with horrendous acts being committed. I liked the parallels of the ‘good’ versus ‘bad’ and how the characters reacted to life with Dragonscale from the perspective of the survivors and the sufferers. I particularly liked the development of Harper’s character. At the start she is a relatively reserved and timid woman, but her behaviour changes as the story develops, as her instincts to survive and to protect her child kick in.

‘…she lifted her gaze to stare into the night, where a hundred flaming birds turned in a widening gyre of their own before scattering into the stars.’

I enjoyed reading The Fireman. It is quite a lengthy read at around 750 pages but there are plenty of things happening to keep up the interest and I was keen to find out what happened to Harper and the mysterious Fireman. I also enjoyed the various literary and cultural references which are scattered throughout which add a little humour to what is a dark tale. It is an intriguing, complex novel which would appeal to any fans of post-apocalyptic fiction.

One thought on “The Fireman by Joe Hill”