Each month’s box has a different theme and the theme for August 2016 was ‘Dystopian’ which I was excited about, here is what was inside! 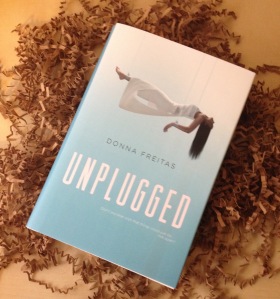 This month’s book was Unplugged by Donna Freitas. Here is what it says on the back:

‘My hand moved out toward the icon, my finger unfurling until it met the surface of the App. A familiar icy feeling began to seep through me. Instead of enjoying it like I normally did, I felt uneasy, like something was wrong. Like I – Skylar Cruz – was being erased’

I haven’t come across this book before but the premise sounds interesting so I will look forward to reading it. This is a hardback edition and I was also interested to see that it was a US edition which is something a bit different. 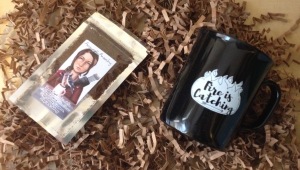 Along with a book each month, each box contains a selection of book themed gifts. The first item was a plastic mug inspired by The Hunger Games designed by Nerdy Bookworm Box. It features a flames design with the quote ‘Fire is Catching’ and an arrow. Also inspired by The Hunger Games was an ‘Arrows and Anarchy’ fandom coffee sachet created by Cracked Black Inc. I must admit I am not a coffee drinker but I liked the idea and the illustration on the packaging was great. (Note: Sachet pictured is half empty due to slight issue with a torn packet and spilt contents during transit, but sachet included was full!) 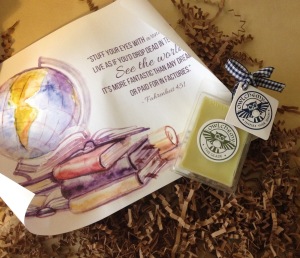 The next item I spotted was a scroll tied with a bow. This was a poster featuring a quote from Fahrenheit 451 designed by Nerdy Bookworm Box. Next up there was a pack of ‘The Glade’ wax melts inspired by The Maze Runner custom made for this box by Owlchemy (great name!). This was a beautifully presented pack and it smells lovely! 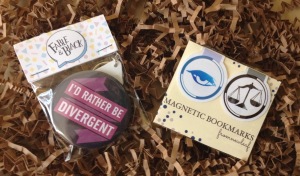 There were two items inspired by Divergent. The first was an ‘I’d rather be divergent’ keychain designed by Fable and Black which I will probably attach to one of my many tote bags. The second was a set of two magnetic bookmarks representing the different factions from Divergent. These were designed by New Leaf and each box includes two of the five factions. I must confess I haven’t read Divergent yet so I wasn’t sure which ones I got!

Once again I liked the contents of Nerdy Bookworm Box and thought that the items worked really well with the theme. This box also included the second issue of the ‘Owl Hoots’ mini magazine which is a nice addition. One thing I love about these boxes is the way the books themselves are wrapped up with brown paper and tied up with blue string and a charm. Each box I have had has had a different charm attached relating to the theme – a key for ‘Dark Magic’ a heart for ‘Book Boyfriends’ and an arrow for ‘Dystopian’ which shows how much thought has been given to the little details each time.

I will be getting this box next month and the theme for September is ‘Queens’ which should be brilliant. It has already been revealed that one of the suppliers is Funko so I am particularly excited about adding to my growing Funko collection! I can’t wait to see what’s inside!

Check out my unboxings from previous months here:

Find out more on the Nerdy Bookworm Box website.