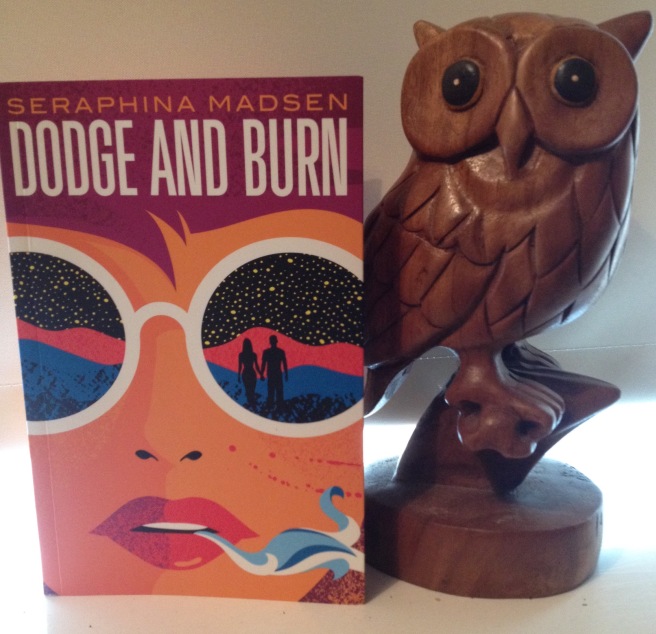 Since I backed independent publisher Dodo Ink on Kickstarter last year I was eager to read their launch titles, the first of which was Dodge and Burn by Seraphina Madsen. And as I started reading I quickly realised I was joining quite a bizarre and unforgettable journey…

‘As long as my imagination was intact, there were no limits. I could create meaning and purpose and that was enough.’

The novel is narrated by Eugenie Lund, who we learn from the opening sentences is a missing heiress. Her father, an explorer and heir to a publishing empire, offers a substantial reward for information leading to her safe return. A breakthrough of sorts comes when a notebook thought to be written by Eugenie is discovered in a Spanish cave, and from here is where Eugenie’s extraordinary tale begins. We learn that her mother died a shocking and untimely death as a result of a killer bee attack which results in Eugenie and her sister Camille being left under the care and tutelage of Dr Vargas. Vargas is something of a sinister character and the girls are subjected to some horrific treatment all in the name of Vargas’ experimentation. Fleeing their troubled past the sisters leave Vargas but become separated, and Eugenie ends up on a road trip to locate the whereabouts of Camille.

Eugenie’s journey is a surprising one and not like anything I have read before. With her husband Benoit by her side they embark on a trip across the country where amongst other things they end up gambling in Vegas, rescuing a dog and meeting a family who grow a substantial amount of drugs. Eugenie and Benoit are not adverse to drug taking and the pair share many drug-fuelled experiences. The fact that Eugenie has these experiences means that the line between what is fantasy and what is reality becomes blurred, and you are never quite sure which events are real and which may be a fabrication, or a dream. Eugenie is a fascinating, complex character who has the strength to deal with everything this surreal road trip can throw at her. And all the while above everything else it is Camille on her mind, and she remains determined to be reunited with her lost sibling. Once I got into the story I became intrigued by Madsen’s unique, imaginative writing. It is an unusual, intense and sometimes outrageous story with childhood memories and family at its heart.

‘How much longer did we have? I had to find Camille…Her presence was here; I could feel it.’

Dodge and Burn is a bold debut and an exciting first release from Dodo Ink. I would recommend to any readers who are looking for a book that is a little different, and a little surreal as within these pages lies an unforgettable story.

You can find out more about Dodo Ink by checking out my Q&A here!

2 thoughts on “Dodge And Burn by Seraphina Madsen”