I was very excited to receive a proof copy of forthcoming thriller My Sister’s Bones by Nuala Ellwood and was delighted to have the opportunity to take part in the blog tour. Available as an e-book from 1st November and due for publication in hardback early 2017 this is a gripping read that looks set to be a big hit next year…

‘The doctor is speaking, but it’s hard to hear her over the voices.’

This compelling story begins with Kate Rafter, a war reporter who is being detained at a police station, facing the questions of a clinical psychologist. It is clear that life for Kate has been turbulent. She appears to suffer symptoms of post traumatic stress, hearing voices and seeing things, things and people she knew from her time in Syria – a nightmare she can’t wake up from. Her trauma is further exacerbated by her difficult family life. Her mother to whom she was close has recently passed away, as has her father with whom she had a more unpleasant relationship. Then there is her sister Sally, who has turned to drink to numb the memories of her childhood. It is their mothers death which leads to Kate’s return to her home town of Herne Bay but when she arrives it is not just her grief that haunts her. There is the small matter of the scream that wakes her in the night, the things she thinks she can see, and the feeling that something is not quite right at her mother’s home.

‘My mind feels like its shutting down. How can this be? I am standing here covered in someone else’s blood.’

I won’t go in to too much detail concerning the plot to avoid spoiling the story and how it develops but safe to say it is one that grabs you from the first page and doesn’t let you go. In the early stages of the novel there are so many questions raised and I was desperate to find out the answers. What happened to Kate and Sally during their childhood? What did Kate do to end up in the police station? And just where do those screams come from? There were so many secrets and memories to be uncovered and with Kate’s mental state there was uncertainty over what was real and what was not. The characters were complex and fascinating, and they were all to some extent haunted by their past. As the story develops these memories gradually creep to the surface, and a picture begins to emerge of what has really happened. And there were a few twists and turns along the way that I could never have predicted which kept me gripped right up until its chilling conclusion.

‘Do you want to know something about your sister, eh? Shall I tell you a secret?’

I loved My Sister’s Bones and found it to be one of the most surprising, gripping thrillers I have read this year. Featuring a tangled web of secrets and haunting memories, this is a novel that is sure to captivate psychological thriller fans when it is published next year.

My Sister’s Bones is to be published on 9th February 2017 by Penguin Viking but is available now as an e-book. Many thanks to Annie Hollands for providing a proof copy for review.

This review has been written as part of the My Sister’s Bones blog tour. You can follow the rest of the stops on the tour on the dates and blogs below: 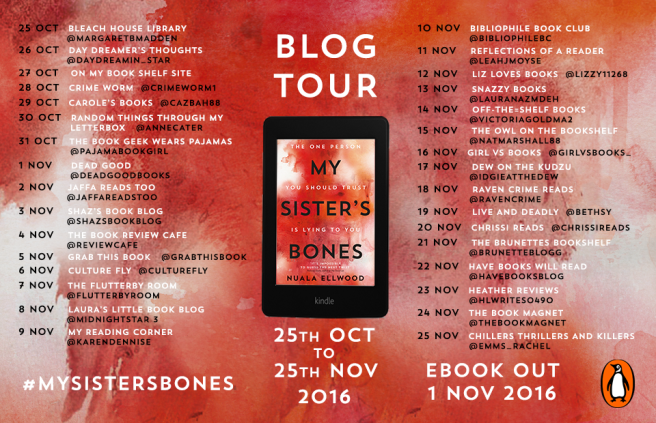