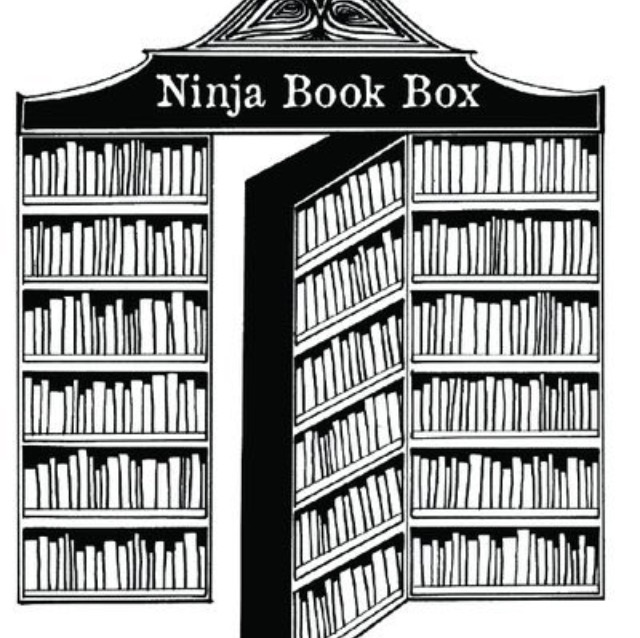 This week I received the very first Ninja Book Box subscription box. I was one of many book lovers who recently supported Ninja Book Box via their extremely successful Kickstarter campaign. This is a new quarterly subscription service with the emphasis being on promoting books from independent publishers of all genres, and including associated gifts from local suppliers. This really appealed to me as I like to read a variety of books from publishers big and small so I was excited about the prospect of discovering new books I may not have come across or chosen for myself.

Without further ado, here is what was inside the very first Ninja Book Box, the theme of which was ‘Slightly Surreal’

This quarter’s book was Star-Shot by Mary-Ann Constantine published by Seren Books. Here is a little about the book from the blurb:

‘Part fable, part mystery, Star-Shot is a poignant debut novel set in Cardiff, in a time that is almost, but not quite, our own. As their paths cross in a circumscribed world of benches, parks and galleries, a handful of characters reveal stories of obsession, loss and recovery, creating a fragile network of relationships which will help to resist the inexorable channels of silence eating into the city.’

This is a book and publisher I hadn’t come across before and the premise certainly sounds interesting. It is also signed by the author which is lovely. Also pictured is the Ninja Book Box key ring and the custom made charm and bag. Each month’s box will include a charm and bag which is related to the book and theme, and this month’s features a little frog inside a lily pad which is very sweet!

Next up we have the associated gifts which were individually wrapped. These included a beautiful ‘Starry Skies’ tea towel by Blinkin’ Imp which features a gorgeous illustration of a night sky filled with constellations. Also featuring a star design was a lovely coaster by Jacqueline Talbot Designs. This was of excellent quality and the design is really pretty. There was also a greetings card featuring an illustration of Cardiff streets by Crafty Bacon Studios.

The last few items in the box were a card about the box which tells you a little about the items included and the theme. Sealed in an envelope was a leaflet featuring an interview with the author and the Ninja’s review of the book. And also there was a little card featuring a recipe for Welsh Cakes.

I was really impressed with the first Ninja Book Box. The book and items were interesting and I liked the way everything ties in well with the theme. It is also clear that a lot of love and attention has gone into putting the box together and wrapping the individual elements which gives the box more of a personal touch. The theme for the February box is ‘A Shakespearean Mystery’ so I am looking forward to seeing what this includes! 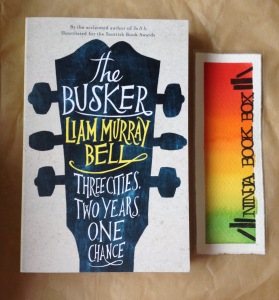 Part of my Kickstarter reward was to receive a bookmark and a copy of a title which was shortlisted for the first box. The bookmark is a very striking, colourful design by Skinny Hues and the shortlisted title was The Busker by Liam Murray Bell published by Myriad Editions. Here is a little about the book:

‘Rab Dillon is about to become the next great protest singer. Plucked from obscurity in Glasgow and carrying only the guitar given to him by the girl who broke his heart, he travels down to London to record the debut album that will speak to the dispossessed, the disenfranchised and the disheartened.’

Again this sounds like an interesting story that I am looking forward to reading!

If you would like to find out more about the Ninja Book Box, you can check out their website here.

I also recently had a Q&A with Ninja Book Box founder Bex Hughes which you can find here.