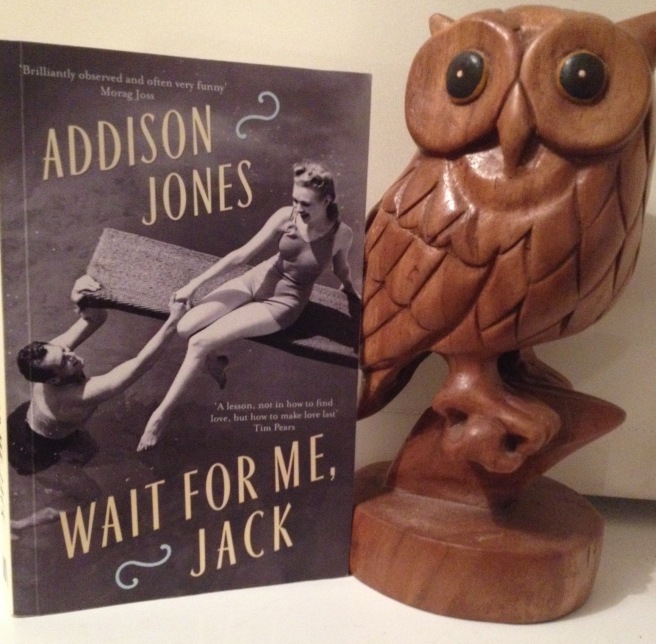 Wait For Me, Jack is the latest novel from Addison Jones who has previously written both novels and short stories under the name of Cynthia Rogerson. This latest novel is a story of love and marriage and how it evolves over time.

‘Then she begins to run because something inside is lurching towards him, as if the sight of him is something she cannot live without.’

In Wait For Me, Jack, we meet Jack and Milly, a couple who get together in the early 1950’s, two young people determined to live the American Dream together. And the opening chapter takes place in 1950, where we see how Jack and Milly first meet and their journey together begins. From this point the story moves forward in time to 2014, to see Jack and Milly over sixty years later, still married and dealing with the various challenges associated with aging. As the couple reflect on the life that has passed before them, they try to cope with their day to day lives, and the illnesses that hinder them. From here each chapter takes a step further back in time allowing us to get to know Jack and Milly and how they and their relationship have altered over time. And their lives are certainly complex, filled with an array of emotions – love and resentment, pleasure and pain, tragedy and joy.

‘As long as we can keep dancing, Milly, I think that’s what we should do. Dance.’

In the afterword Addison Jones speaks of her fascination with marriage and how this novel is written partly in tribute to her own parents who have been married for this length of time – although the events that occur over the course of Jack and Milly’s marriage differ greatly. Jones has set out to portray a marriage that has stood the test of time in the face of adversity. And through Jack and Milly we get a very honest portrayal of love and marriage and how this can change over the years, and how Jack and Milly have developed as individuals. And they have had their fair share of difficulties along the way, with family tragedy and infidelity threatening their close bond. This made for some heartfelt, moving passages of writing, particularly seeing the couple in their later years as they consider past mistakes, and begin to contemplate their own mortality. I liked the way the novel was structured and how we get to see the characters lives change over the years. And as more details were revealed my perception of the characters also altered and I was left surprised by some of the things they said or did. This is a brilliantly observed novel which provides insight into men and women and their attitudes to marriage. And whilst the couple at the centre of this story have been through a lot, their story is told with warmth, and a little humour.

‘You give up too easily. Marriage is like a job. You’ve got to put in the hours.’

I enjoyed Wait For Me, Jack, a story of love and how to make it last, against all the odds. I was drawn in by Jack and Milly’s story, and the truths about love and marriage that were revealed along the way.

Wait For Me, Jack was published on 19th January 2017 by Sandstone Press. Thank you to Keara Donnachie for providing a copy for review.

One thought on “Wait For Me, Jack by Addison Jones”