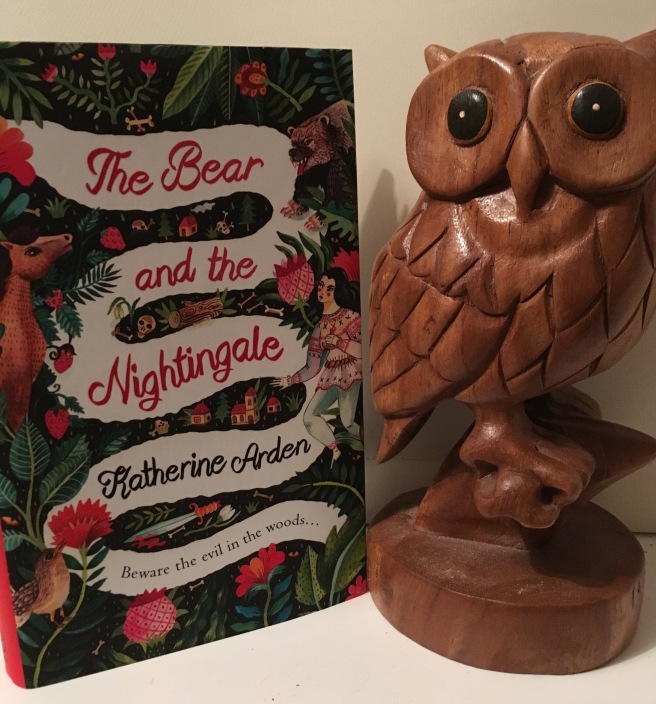 The Bear and The Nightingale was a book which caught my eye when browsing in my local store. I was drawn in by the beautiful cover illustration and intriguing title. And when I saw that this was a book inspired by Russian fairy tales I just had to pick it up!

‘It is time to put aside dreaming. Fairy tales are sweet on winter nights, nothing more.’

Katherine Arden’s debut is a magical tale that captivated me from the very beginning. It is set in a village in the wilderness of northern Russia. Here we meet Vasya and her family. Vasya is the youngest daughter in the family and despite growing up in a traditional setting where status and finding a husband is key it is clear that there is something different about Vasya. There is a wildness to her, a reluctance to accept the route that her family expects of her, instead wishing to form her own path as a young, free woman. And in the village where tradition and folklore are at its heart, a stranger presents Vasya’s father, Pyotr, with a gift – a necklace that he must give to his young daughter. The encounter leaves Pyotr disconcerted, unsure of the stranger’s intentions towards Vasya. As a result, he is reluctant to carry out the mysterious request, instead hoping that his daughter finds an appropriate suitor. However, mysterious events arise which threaten the peaceful life of the villagers and Vasya discovers that she may be key to keeping the trouble at bay…

‘But what was there? It looked like a great tree: one she half remembered, with an odd sly memory, that slid in and out of her mind. No – it was only a shadow, cast by the moon.’

I loved the beautiful writing and the sense of atmosphere that is created. I really enjoyed learning more about Vasya’s family and what it was like for her to grow up in the village with the traditions that they are accustomed to. The wilderness setting helped to create the fairy tale environment along with the stories of the creatures within it that are passed on through the generations – the demons and spirits that lurk in the woods. But whereas some may fear such creatures, Vasya thrives among them, relishing in discovering the world beyond her home. It was hard not to admire Vasya’s character, a girl who seems wild and fearless and destined for something special. The story of the mysterious necklace added intrigue and I was fascinated to discover how events would unfold in the village. Arden has written an absorbing story which transports the reader to medieval Russia where she combines historical detail with Russian folklore. It is a story of magic and monsters which also has a very human story at its heart, the story of a young woman who transcends the role that her family have set out for her, a woman who grows up in one world who longs for another.

I thoroughly enjoyed The Bear and The Nightingale and found it to be a beautifully written, enchanting story. It is an atmospheric, lyrical story of love, family and growing up in a magical and dangerous world.

8 thoughts on “The Bear And The Nightingale by Katherine Arden”