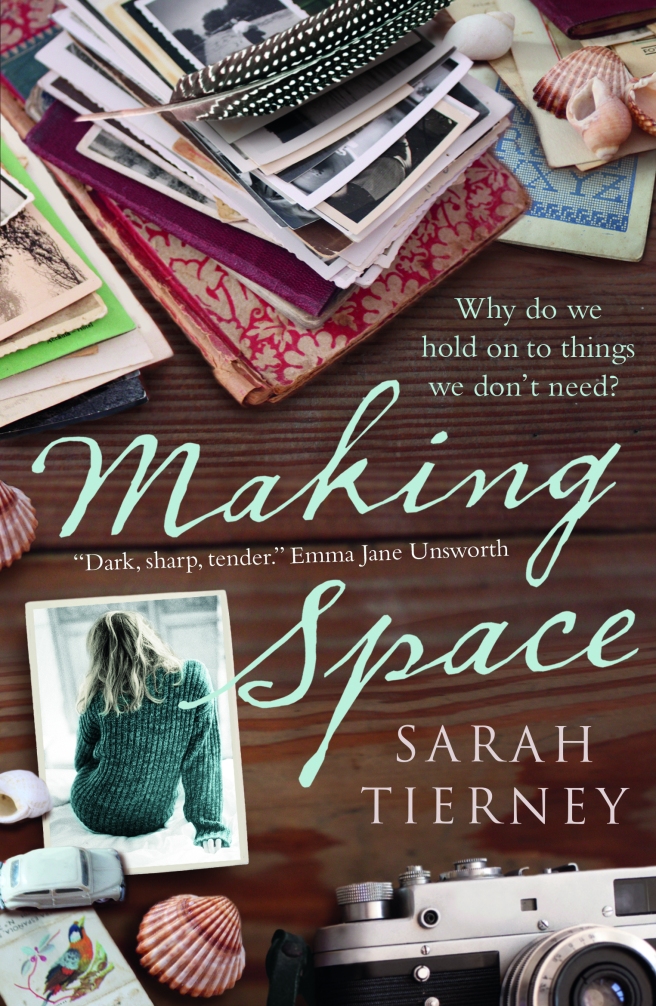 Making Space by Sarah Tierney is a book I am very much looking forward to reading. Published in paperback by Sandstone Press on 20th April, you can get the e-book this week for only £1. It tells the story of a woman who is at a point in life where everything feels like its in limbo, until she meets someone who may be the key to finding her place in life. The premise really intrigues me, and as the protagonist is my age it feels like it could be particularly relevant to me.

Today, as part of the blog tour for Making Space, I have a guest post from Sarah in which she answers some questions about the book.

Q and A on Making Space by Sarah Tierney

What’s the novel about?

It’s a love story, set in Manchester, about a girl who gets a job helping a book hoarder clear out his house. They’re very different to each other – she’s floundering in her career, he’s a successful photographer. She’s just given away all her stuff to a charity shop, he really struggles to throw anything away. And then there’s a 16 year age gap between them. But she gradually becomes as attached to him as he is to his books.

Essentially it’s about why we hold on to things – possessions, relationships, experiences from the past. And what happens when we hold on to them for too long and they start to become damaging.

Erik’s damage is evident in the state of his house. Miriam has to find out what secrets he’s buried under all those books. And at the same time, she’s uncovering the issues from her own past that are holding her back.

Tell us a bit about the characters.

The narrator is a 29-year-old temp called Miriam whose life isn’t turning out as she’d hoped. Her flatmate is dating her ex. She’s living in a rented room so small she can’t even fit in a double bed. She feels like she’s not quite made it as an adult – she’s stuck in that limbo period you experience after leaving education.

Then there’s Erik, who she falls for, when she’s trying to fill the emptiness in her life. He’s 45, he’s from Slovakia, and he’s living in a big old house crammed with books and magazines. He employs Miriam to help him clear it out before his teenage daughter, Chloe, moves back in with him after ten years living elsewhere.

What gave you the idea?

A friend told me about a job she had when she was a student which was very similar to the phone-answering job Miriam has at the start of Making Space (she has to pretend to be from lots of different companies, like a cross between an undercover agent and a receptionist). As part of that job, my friend was asked to help an old man, a hoarder, clear out his house. This man saw value and beauty in things that most people wouldn’t see – the example she gave was the stickers you get on mangoes – he thought they were wonderful. I can’t remember whether he was an artist like Erik but when I started to research hoarding, I found out that hoarders sometimes are creative, artistic people.

I thought an artist-hoarder would be a great character for a novel, and I liked the idea of a young woman helping him clear out his house.

In the first draft, the hoarder was a lot older – in his 80s – so it wasn’t a romance. In the second draft, I knocked 40 years off his age, and made it into a will-they-won’t-they type of story, which meant I could introduce lots of flirting and sexual tension and give Miriam a greater emotional stake in clearing Erik’s house. As she says in the novel, he’s clearing it to make room for his daughter. She’s clearing it to make room for herself.

Is the story based on personal experience?

The emotions are real but the events are fictional. Almost nothing that happens in Making Space has happened to me, but there are similarities between myself and Miriam, and to a certain degree, Erik. Like a lot of people I went through stages of uncertainty and loneliness in my twenties. But I wasn’t putting my life on the page when I wrote Making Space – that would have been very dull indeed.

Personal experiences led me to want to write about mental illness, and the battles some of us go through to control or change our thought processes and behaviour patterns. But again, I didn’t write direct from life. I invented characters who could explore that conflict within a fictional story.

This post was written as part of the Making Space blog tour. Check out the other stops on the tour on the dates and blogs below: