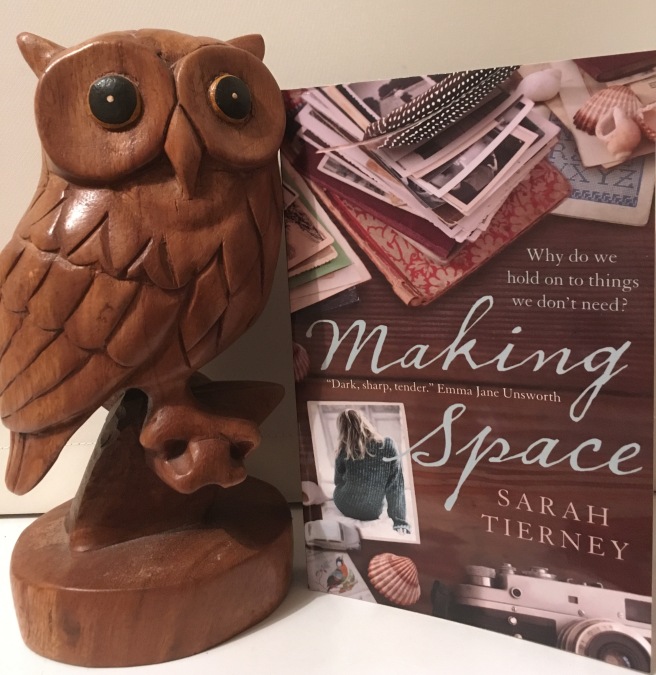 Earlier this month I took part in the blog tour for Making Space, the debut novel from Sarah Tierney. In that guest post, Sarah introduced us to her book and it was one I was looking forward to reading based on the premise and the protagonist. It is a book that explores human emotion and the way we struggle to let go, or to hold on to what is most important to us.

From the start I could relate to the central character, Miriam. Miriam at 29 is the same age as me, and we are introduced to her as she is on the hunt for a new job in a line of many temp jobs. Her love life also leaves a lot to be desired and her relationship with her flatmate has got a little more complicated. This leaves Miriam feeling at a loss, feeling like she needs to clear out and start a fresh life. As a result she gets rid of the majority of her belongings, in an attempt to start again. But as her old life is packed away a new one appears as she meets Erik, a 45 year old artist who has the opposite issue to Miriam – he is an obsessive hoarder haunted by the past, who can’t bring himself to clear out the hundreds of books, magazines and numerous artefacts that clutter his home. Employed by a temp agency to help Erik with his house clearance, Miriam and Erik’s lives are thrown together, and the two of them are left to work out the best way to move forward in their lives.

I really enjoyed discovering Miriam’s story and as mentioned previously being the same age I could sympathise with her and the feeling of being a little lost, trying to find your place in the world. I also liked the contrast between Miriam and Erik and how they work together to decide what they need to keep and what they should let go. They are essentially two lost souls from opposite sides of the spectrum, and it was great to see how their relationship developed over the course of the novel. We see how these two individuals who are haunted by their past and afraid of their future learn to connect with one and other. The prose was wonderfully written and it deals with a range of human emotions and the intricacies of daily life. There is a melancholic tone throughout, as both the main characters have had difficult experiences in life. But there is also hope and optimism and the chance of a future as Miriam and Erik begin to realise how significant their meeting has become.

Making Space is an impressive debut novel and an enjoyable read. I was intrigued by Miriam’s story throughout and enjoyed finding out how two strangers join together to shape a new future.

Making Space was published on 20th April 2017 by Sandstone Press. Many thanks to Keara Donnachie and Sandstone Press for providing a copy for review.

One thought on “Making Space by Sarah Tierney”