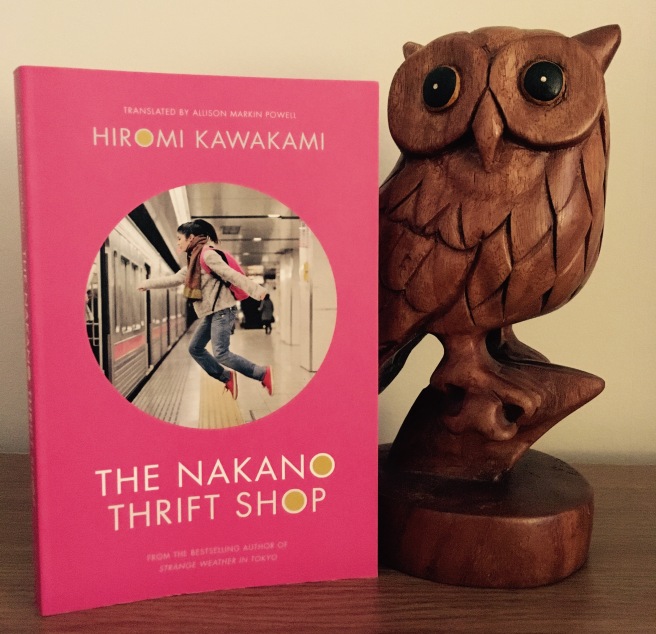 One of two books I am reading for my book club this month is The Nakano Thrift Shop. Translated from the Japanese by Allison Markin Powell, this is the latest novel from Hiromi Kawakami, bestselling author of Strange Weather In Tokyo. I hadn’t heard of this book prior to my book club, but its premise and bold cover made it stand out to me as a good summer read.

The Nakano Thrift Shop is a tale of love and companionship with events revolving around a thrift shop owned by the enigmatic Mr Nakano. It is narrated by Hitomi, a young woman who finds work within his shop which is filled with bric-a-brac and a jumble of curious objects. And it is amongst these curios that a relationship begins to form between Hitomi and Takeo, another of Mr Nakano’s helpers. But as the two spend time in each other’s company, Hitomi is left bewildered by Takeo’s often abrupt manner and strange behaviour. Over the course of the novel we see how Hitomi’s relationship develops not only with Takeo but with Mr Nakano and his sister, Masayo, along with a host of customers who frequent the shop in search of weird and wonderful objects.

This book is a little different from what I usually read but I liked the setting and quickly became intrigued by the lives that play out within the thrift shop. Each of its chapters is named after a particular object which holds significance for the characters along the way and I liked the idea of a thrift shop being filled with such objects which hold stories all of their own. The customers that visit also have their own stories to tell which are passed along through the shop and I found it fascinating discovering little details about each of them as it explores the extraordinary things that can be found within the ordinary. I also read on in interest to see how Hitomi’s relationships would evolve and alongside her I was intrigued to find out more about Takeo and what is behind his disarming behaviour. I found this book to be a charming read, and there is a subtlety to the writing in its portrayal of the ordinary, and of the little intricacies of life. The setting itself is wonderfully described and there are details of local cuisine and culture which help to set the scene. Through this story of a shop and its customers who come and go, Kawakami effectively portrays the bond that remains with those who work there, and their loyalty to each other and to the shop.

The Nakano Thrift Shop is an enjoyable read and one which explores love, life and friendship and a shop that binds it all together.

4 thoughts on “The Nakano Thrift Shop by Hiromi Kawakami”