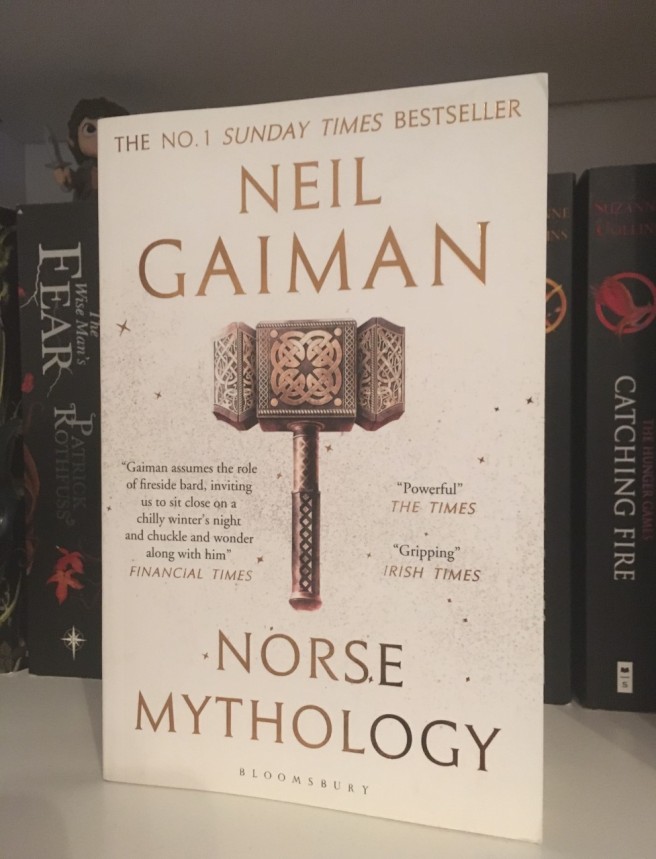 My latest read was another book I have been meaning to read for a while from an author whose work I have loved previously. In Norse Mythology, Neil Gaiman retells some of the great Norse myths, and I thought this would be the perfect read to enjoy on a cold winters night!

‘Before the beginning there was nothing – no earth, no heavens, no stars, no sky: only the mist world, formless and shapeless, and the fire world, always burning.’

I must confess to having very little prior knowledge of Norse mythology, as aside from Thor and Loki I hadn’t previously familiarised myself with this world so I was interested to find out more. And it didn’t take me long to get drawn into this world, discovering new characters and the tales which have inspired those stories that are popular today. In Norse Mythology there are fifteen stories filled with gods and goddesses, magic and mischief, and mythical creatures. There is a good variety of stories here that vary in length so it is a book that you can dip in and out of really easily if you wanted to savour each story one at a time.

What all the tales have in common is that they are rich in imagination and have effectively recreated this mythological world to engage a new audience. There are stories here that are action packed, with some characters that are familiar and others that you may not have heard before, but it was a delight to discover them. This world has been lovingly and vividly created, with the myths retold with a sense of wonder and humour, and a few surprises along the way. There are also a lot of characters introduced along the way and there were moments where I lost track of who was who but there is a handy glossary to refer to which helped with this. I also found Gaiman’s introduction to be fascinating reading as he provides further insight into the history of these myths and how they were important to him and his own writing, as he introduces these myths to new readers, and encourages them to do the same.

Norse Mythology was an entertaining read which would be perfect for any fans of classic myths and folklore. It is a fascinating series of stories which were wonderfully told, and introduced me to new worlds and stories.

One thought on “Norse Mythology by Neil Gaiman”