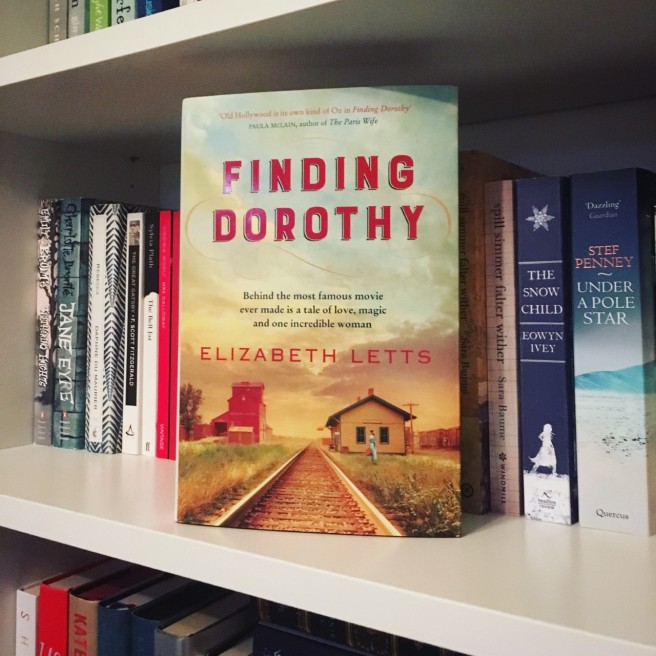 Today is publication day for Finding Dorothy, the latest novel from Elizabeth Letts and I was delighted to receive an early copy of this book which tells the story of Maud Gage Baum, the wife of Frank L Baum, author of The Wonderful Wizard Of Oz.

I often enjoy historical fiction so was looking forward to reading this story which transports the reader back to 1930’s Hollywood, where Maud learns that M.G.M studios are adapting her late husband’s beloved story into a film. I immediately warmed to Maud, and the passion she shows for her husband and his work, as she visits the set to oversee how the production is progressing, doing her best to ensure the film captures the magic in her husband’s words. But there are aspects of this experience as she watches the story come to life that remind her of points in her life, both treasured family memories and times of struggle, and the narrative alternates between two timelines – the film production in the 1930’s and the 1880’s where we see Maud’s life unfold. This was an equalling captivating timeline which follows this young woman coming of age, falling in love, and finding a home for herself and her growing family, in the face of much adversity.

The Wizard Of Oz is an iconic film, one which launched careers and brought a beloved story to life, and it was fascinating to read this reimaging of its creators life. I particularly enjoyed discovering more about Maud’s blossoming romance with Frank, and her desire to be with him despite his theatre background leaving her mother sceptical of his ability to provide for a family. Maud’s mother Matilda is another fascinating character, having been one of the nineteenth century’s most outspoken women’s rights activists. And this spirit and determination is something that was passed onto her daughter. As the story develops we learn that life wasn’t always easy for the Baum family, and there were periods of financial hardship. That said it took a lot to dampen their spirits, and despite the difficulties there were glimmers of hope, and moments where Frank Baum’s imagination shone through, adding a little magic and happiness in the most uncertain of times. I really enjoyed these little references, and moments where aspects of the story of Oz appeared, as we get a glimpse of the story beginning to form in Baum’s mind, from the origin of the tin man, to a recognisable choice of fabric for a dress.

Finding Dorothy is a thoroughly enjoyable and richly imagined novel which gives the reader a little insight into the golden age of Hollywood as well as the moving story of a man who had a story to tell, and the woman who would help bring it to life decades after his death. Prior to reading this book I hadn’t really known anything about the author who wrote The Wonderful Wizard Of Oz, so I really enjoyed this fascinating account of his life, in which we see the power of imagination and storytelling, and where the inspiration for something wonderful was found.

Finding Dorothy was published on 4th April 2019 by Quercus Books with thanks to Ella Patel at Quercus for providing a copy for review.

One thought on “Finding Dorothy by Elizabeth Letts”