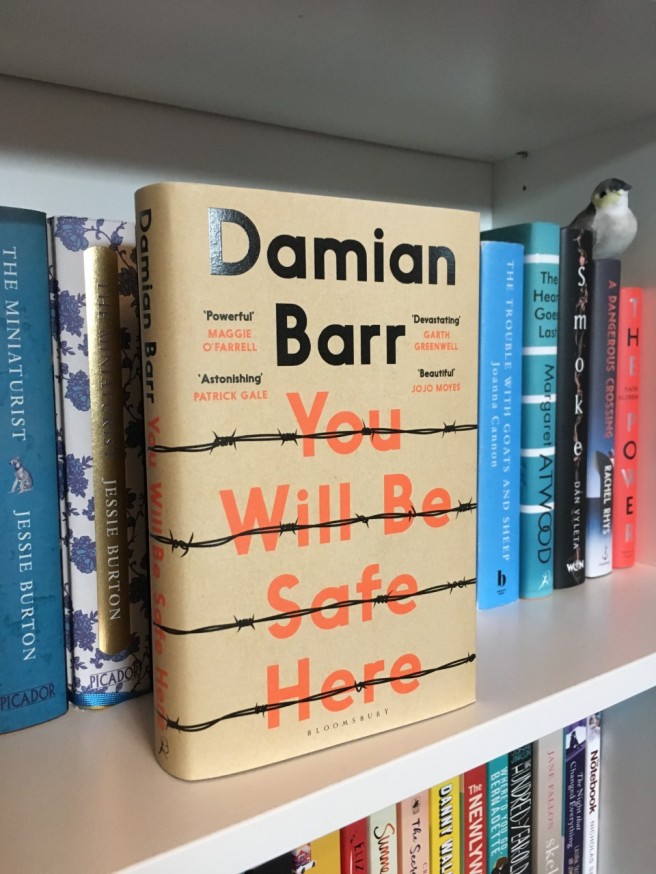 You Will Be Safe Here is the debut novel by Damian Barr and it is a book I have been looking forward to reading for a while. With events which occur over the course of a century it is a novel which tells two connecting stories, inspired by true events.

From the opening pages I was hooked, and quickly became immersed in this story. The prologue leaves a sense of foreboding, as we get our first introduction to Willem, a teenage boy living in Johannesburg in 2010. Willem is something of an outsider, preferring to spend his days with his beloved pet dog, curled up with a book. However, this is something of a concern to Willem’s family, fearing that there is something wrong with him, something that needs to be fixed. This leads to him being sent to a training camp called New Dawn, one which promises to ‘make a man’ out of Willem. But what would appear to be a training camp is actually far more sinister. From here we go back in time to South Africa in 1901, during the second Boer War. Here, through the form of diary entries, we get a glimpse into the life of Sarah van der Watt, and her story is a heartbreaking one. With her husband away from home fighting in the war, Sarah has a battle of her own to face, and is forced to watch as her livelihood is stripped away. With her home in tatters, she and her son are forced to move into a concentration camp. There is a promise that they will be safe here, but of course, this is far from the truth, and her story is a particularly heart wrenching one as the true extent of the cruelty unfolds.

This was a book which caught my attention from the start, with its moving portrayal of two lives over a century apart. Both of these stories were equally compelling, each with a distinct voice, and it was interesting to see the similarities between these stories and the way in which these lives are connected. I was also intrigued by the novels setting, as I knew very little about the Boer War so I was interested in learning more about this period of time, and the impact that this had on generations. Providing a glimpse into a hidden colonial history, this is a moving story which highlights the cruelty that humans are able to inflict on one and other. But whilst this is at times a difficult read which deals with some challenging subject matter, there is also a sense of hope, as it explores the complexity of human emotion, and our capacity for kindness.

You Will Be Safe Here is a powerful, wonderfully written story which I really enjoyed. With its vivid portrayal of the challenges faced across the generations, it was a compelling and thought provoking read.

One thought on “You Will Be Safe Here By Damian Barr”