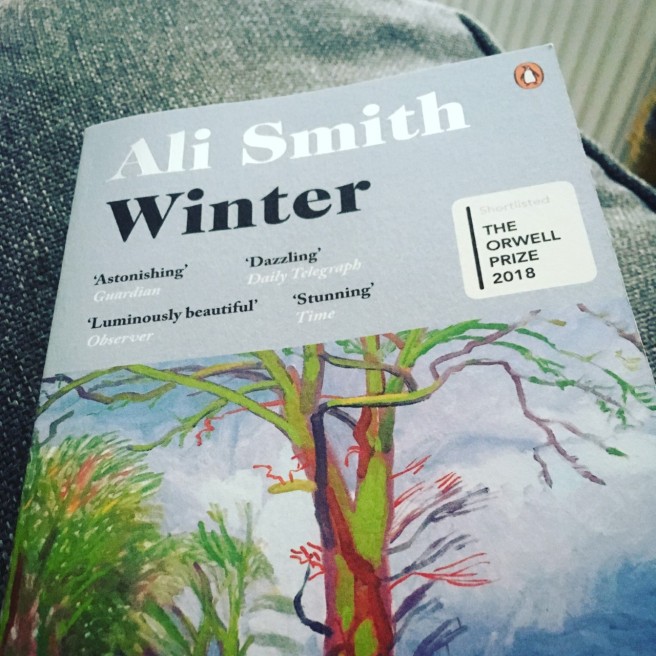 Last week, during the heatwave, I settled down to read a book that was not in keeping with the hot weather, Winter by Ali Smith. Winter is the second in Ali Smith’s quartet of novels based around the seasons, and it is one I am a little late reading having only purchased my copy recently when I was lucky enough to go and see Ali read from Spring, the third book which was published earlier this year.

‘but in any case forget ghosts, put them out of your mind because this isn’t a ghost story, though it’s the dead of winter when it happens, a bright sunny post-millennial global-warming Christmas Eve morning …and it’s about real things happening in the real world involving real people in real time on the real earth…

One of the things I liked the most about the first book in the series, Autumn, was the engaging, lyrical style of the writing, and this is something that continues in Winter. It is a style of writing which draws you in as it sets the scene, a scene which is certainly timely, which speaks of the world we live in today. We are introduced to a cast of characters, some who are family, others who are strangers, who gather to spend Christmas together in Cornwall. As we see their time together unfold, and the relationships between them, we also get a glimpse at the world around them, as Smith provides a wry commentary on modern life, and the state of the world we live in. There are mentions of significant topical events which make this story very timely, as it explores the precarious world in which these characters have been brought together and the secrets and stories that they have to tell. These include those of Sophia, a retired businesswoman, along with her son, Art, an aspiring nature writer, and his aunt Iris with whom Sophia shares a fraught relationship. And then there is Lux, the girl who Art brings along to their Christmas reunion, who adds a fresh perspective on things as she becomes immersed in this family’s world for a few days.

Winter was a book which caught my interest from the opening pages, due to the nature of Ali Smith’s writing style, which has a distinct voice. There are some interesting themes and stories explored in this book through these intriguing characters, as we explore the way in which humans behave and interact, as we spend Christmas with this family. One thing I also liked which I didn’t realise when I first started reading was the link between the characters in this story to those in Autumn, so am interested to see further connections across the next two seasons. As we explore the lives of this family, and the memories of their past, we see the complexity of human relationships and the way in which they change through time, which is interwoven with the way in which the world around us is changing with the seasons. It is a story which explores division, both through the division between Art and his family, and the division in the political landscape, as recent current affairs are discussed. It is a book which leaves the reader with plenty to think about, as the characters reflect on their own lives, and ask questions of themselves and the world around them.

Winter is another well written and thought provoking edition to the seasonal quartet, and I am looking forward to reading Spring very soon to see how these stories continue.

One thought on “Winter by Ali Smith”