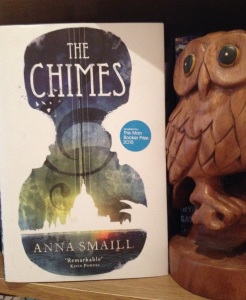 Longlisted for the 2015 Man Booker Prize, The Chimes is an inventive take on the dystopian novel.

Our protagonist is Simon Wythern, an orphan who arrives in London into a totalitarian society where everyone is controlled by music, and memory is forbidden. Admittedly, this was a book that took me a while to get into. It felt quite disorientating at first and I wasn’t quite sure where I was – rather like Simon himself! Society is controlled through a vast musical instrument – the Carillion – which has different effects at different points during the day. These effects are both mental and physical and result in memory loss and in some cases physical sickness amongst the inhabitants.

I really liked the use of memory in this book. It looks at the importance of memory in our lives and our desperation to keep hold of them. Each person holds their own precious memories close to them in a bag as ‘object memories’ there is also this idea of having a ‘body memory’ which you need in order to function. I particularly liked the moments Simon seems to regress into memories of his family as he tries to establish what happened to them, the reason he has travelled to the Capital. In addition, as he fights against the world of ‘The Chimes’, he builds new relationships, most notably with the mysterious Lucien, a member of a group of outlaws who has secrets of his own.

Smaill is a classically trained violinist and the musical theme she has adopted is enhanced further through her use of language. Certain words within the prose have been substituted for classical music terms. These include ‘subito’ in place of sudden/suddenly, ‘tacet’ in place of silent, ‘lento’ is slow/slowly and ‘presto’ meaning fast. As a musical novice, I found this quite frustrating to start with as I had to look up these words before I could fully immerse myself in the story. Nonetheless this was a very original, imaginative addition to the book.

The Chimes is certainly a challenging read, but with perseverance this can be rewarding. For any fans of dystopian fiction wanting to read something a little different this may be worth a read. It’s an intriguing, inventive story of music and memory.